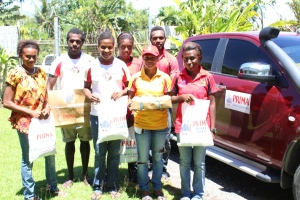 Prima Smallgoods have come to the assistance of National squad athletes training in Lae in preparation for the National Championships and PNG Games this year. Athletics PNG Secretary Philip Rehder said there were currently fourteen national squad athletes from other parts of the country based in Lae since just before Christmas.  Most of the athletes are junior squad members who are part of Athletics PNG’s ongoing  development programme.    “There are also a number of senior athletes who will be taking up scholarships to attend College in the USA later this year. It is very important that they stay together so they can remain focussed and have access to training facilities which they would not have at home”, said Rehder . He thanked Prima through its National Sales and Marketing Manager Kola Geri for the company’s support by way of a fortnightly donation of meat product.