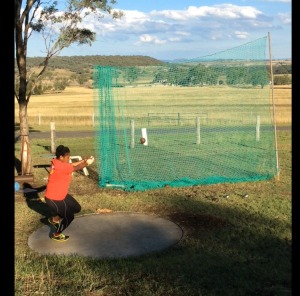 Jacklyn Travertz returned to Port Moresby at the weekend after a three month training stint in Allora, SE Queensland with Australian Hammer and Discus Champion Matthew Denny during which she improved her national record in the hammer throw to 37.23m.  Port Moresby based 22 year old Travertz hails from Daru in Western Province and was added to the PNG team for the Pacific Games last year following a recommendation from throws coach Paul Bannister. She had been referred to Bannister by Aaron Alsop , Manager of the PNG High Performance Training Unit in Port Moresby. Like most Pacific Island nations PNG has not had any athletes throwing hammer for many years to a range of factors including difficulties accessing equipment and safe throwing areas, and lack of qualified coaches. However the arrival of throws coach Paul Bannister in Port Moresby in 2014 led to hope of a revival of hammer throwing. Bannister has taken Jacklyn under his wing and made arrangements for her to spend time in Queensland preparing for the Queensland Championships and Australian Nationals. Although Jacklyn improved her national record from 35.78m to 37.23m and was reported to be throwing 40 to 42m in training, she ran out of time to post a qualifying performance to enable her to take part in the Nationals. Jacklyn is now looking forward to the PNG National Championships in Lae (June 10 to 12) and the Melanesian Championships in Fiji where she can expect to be competing against Brianna Stephens from Norfolk Island and hopefully some New Caledonians.