Season Gets Under Way For US Based Athletes 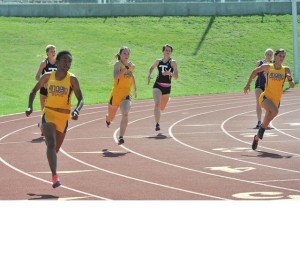 Season gets under way for US based athletes

The outdoor track season is under way in the USA and several PNG athletes have already shown some good early season form. As a result of their strong performances last year four PNG athletes have secured full scholarships to attend university in Texas. Both Rellie Kaputin and Theo Piniau are at West Texas A&M in the town of Canyon near Amarillo whereas heptathlete Adrine Monagi and triple/high jumper Peniel Richard are at Angelo State University in the city of San Angelo. A further six athletes are understood to be close to securing scholarships which will commence in august this year. Kaputin made a great start to her season on Thursday with a 5.96m long jump which is just one cm away from her National Record and a new record for her school.Monagi has also made a good start with some personal best performances in individual events including a 14.66 clocking for the 100m hurdles.In her first heptathlon of the year Monagi scored 4857 points which is her second best ever score and just 162 points behind her Pacific Games gold medal winning total of 5019. Peniel Richard registered a leap of 7.04m in the long jump in his first competition,albeit with the aid of a following wind of 3.1metres per second.

Meanwhile Poro Gahekave and Shirley Vunatup have both made a good start to their 2016 season running for South Plains College,also in Texas. In only her second indoor competition Vunatup clocked much improved  times of 7.73 secs and 24.91 secs for 60m and 200m respectively.She also ran a huge personal best time of 57.52 secs in the 400m on Easter Saturday at the University of Texas El Paso. Gahekave also ran some solid times indoors including 10min 52 seconds for 3000 metres and 5 min 18 seconds for the mile leg of an indoor relay. The Texas based PNG athletes are all expected to meet up this weekend at the world famous Texas Relays Meet in Austin.