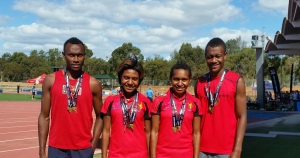 PNG’s four junior athletes had a very successful weekend at the South Australian Championships in Adelaide, collecting six gold and two silver medals. Eighteen year old Ephraim Lerkin led the way with outstanding runs in both the 400m hurdles and in the 400m flat, winning both events by a comfortable margin and clocking personal best times of 54.03 secs and 49.66secs respectively in the process. Charles Livuan was edged out in the 100m final, settling for silver behind local athlete Jack Doney, but turned the tables on him in the 200m event to win in a season’s best time of 22.19 secs. Jenny Albert was impressive in the 1500m event where she clocked a season’s best time of 4min 56 seconds to win comfortably but had to work harder in the 800m to hold off a challenge from Brooke McGregor but eventually came home first in 2min 20.23 seconds. Rama Kumilgo was the only competitor in the under 18 women’s 2000m steeplechase, but was still awarded a gold medal in a race which was combined with other age divisions. Her time of 7mins 40 seconds was her best so far this season but some way off her outstanding personal best of 7min 13 in Cairns last year. The athletes now return to their respective provinces to resume school and will focus now on preparing for the PNG National Championships which will be held in Port Moresby on the Queen’s Birthday weekend in June. Athletics PNG President Tony Green thanked the National Gaming Control Board for their support for the Junior Programme which has enabled the four athletes to lay a strong foundation for their 2016 season by training and competing overseas during the long school holiday break.