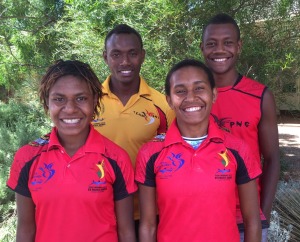 Four junior athletes will take part in the South Australian Championships this weekend in Adelaide thanks to the support of the National Gaming Control Board. Pacific Games Gold medallist in the womens steeplechase Rama Kumilgo has been in Adelaide for five weeks with team mate Jenny Albert training with coach Peter Deane. They were joined today by sprinter Charles Livuan and 400m hurdler Ephraim Lerkin who have been in Fiji for almost two months training with Bola Tafoou , coach of Champion Sprinter Banuve Tabakaucoro.

“This is the first phase of our programme towards the World Junior Championships which is to be held in Bydgoscz (Poland) in July”, said Athletics PNG President Tony Green. “We believe we have several athletes capable of running the qualifying times and it is of course beneficial for their development towards the next Pacific Games to have an ongoing programme like this” We are thankful to the National Gaming Control Board for their assistance with K40,000 towards the cost of the Junior Programme.

Ephraim Lerkin was the standout junior athlete last year running second to Mowen Boino in 54.29secs  at the National Championships , and the qualifying time of 53.20 seconds appears well within his reach. Livuan needs to run 21.35 secs in the 200m and his best time is the 21.76 he ran at the Gold Coast just prior to the Pacific Games last year. Kumilgo holds the national record for the womens 3000m steeplechase with her time of 11min 10 secs at the Oceania Championships last year and her target to qualify is 10min 45 secs. “Both Charles and Rama were full time athletes last year so it wont be easy for them to reach the same heights this year when they are back in full time school, but we will provide whatever support we can” said Green

Lerkin was joined by his mentor Mowen Boino two weeks ago and the pair were able to race together last weekend. The youngster clocked an impressive 54.62 seconds to Boino’s 53.82.It is expected that the pair will be able to run together again this weekend, with the SA open and U20 championships being combined

Meanwhile another promising junior athlete is showing great form in the USA. Hurdler Afure Adah who competed at the Pacific Games and was part of the gold medal winning womens 4*400m relay has been running some top times indoors, clocking 7.75 secs for 60m and an outstanding 24.91 secs last weekend for the 200m. Miriam Peni also continues to improve and recorded an excellent 12.20 recently for the 100m in Brisbane, albeit with a following wind of 2.1mps. Ipswich based Peni has her sights on the Queensland Junior Championships this weekend and the Australian Junior Championships in Perth next month.