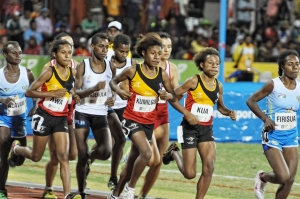 PNG took its Gold medal haul at the Pacific Games to 21 with another five in the final track and field session including clean sweeps in the womens long jump and mens 400m hurdles and taking gold and silver in the womens 400m hurdles and 3000m steeplechase. Rellie Kaputin set the tone for the day with her third gold and third national record of the Games with a winning jump of 5.97m from Adrine Monagi and Helen Philemon. Veteran hurdler Mowen Boino won his fourth consecutive Pacific Games 400m hurdles title with Peniel Joshua and Wala Gime finishing second and third respectively. Donna Koniel maintained the outstanding form she had shown all week with a new Pacific Games record of 58.28 seconds to win the 400m hurdles gold ahead of Sharon Kwarula and Ana Baleveicau of Fiji. PoroGahekave peaked at the right time with a strong performance in the 3000m steeplechase but despite her best efforts she could not match the power of Rama Kumilgo. The 16 year old from Simbu has been a revelation in this only her second year in athletics. Despite the hot conditions Kumilgo maintained the form she showed in winning the Oceania title in Cairns and claimed the gold in 11min 26.51 secs from Gahekave (11:31.66). The session concluded with more relay drama as PNG repeated its 1991 performance by winning the mens 4*100m relay but not the womens. The home crowds hopes were high as ToeaWisil streaked down the back straight but a poor exchange handed the initiative to Fiji and despite the best efforts of Sharon Kwarula to close the gap in the home straight the PNG girls had to settle for silver. Not so the men whose slick baton changing by Theo Piniau ,Nelson Stone, Wesley Logorava and Kupun Wisil meant the race was over by the time sprint king BanuveTabakaucoro got the baton for Fiji on the final leg.