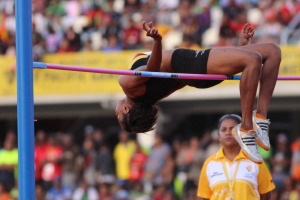 The night of Thursday July 16 will long be remembered in Papua New Guinea as the night PNG athletes showed their dominance in track and field with an amazing haul of eight gold, five silver and four bronze medals and for a hugely entertaining night of athletics.   Sharon Kwarula and Wala Gime led the way by winning the sprint hurdles finals, following which Miriam Goiye led a clean sweep in the womens 1500m. This was followed by a highly entertaining mens 5000m race which had the crowd on its feet.  The experienced NordineBenfodda of New Caledonia ran a relaxed first 4km in third place whilst PNG’s KupsyBisamo and 10000m winner  RosefeloSiosi (Solomon Islands) constantly exchanged the lead with neither being prepared to sit in behind the other. As the pair tired Benfodda cruised into the lead and went on to win the race comfortably. RellieKaputin set her second national record of the Games in winning the womens triple jump and Adrine Monagi maintained her good form to win the heptathlon by almost 200 points from Lucy Turpin of New Caledonia.ToeaWisil was a class apart in the womens 200m final clocking an impressive 24.05secs into a headwind of 3.6mps. Fiji’s BanuveTabakaucoro ran a breathtaking 200m to destroy the field with a time of 20.53secs. Nelson Stone won silver in a time of 21.28secs and Theo Piniau the bronze with a personal best 21.37secs . The stage was set for a dramatic climax to the evening with the 4*400m finals. With Betty Burua and first reserve Shirley Vunatup injured PNG had to call on 17 year old Afure Adah who had earlier run a good personal best 14.83secs in the 100m hurdles final. Sharon Kwarula ran the first leg for PNG and Fijian MakerataNaulugave the visitors a slight lead. However a powerful run by Donna Koniel put the home side back in front before handing the baton to Adah whose job was then to hang in and not let AdiRayawa build too big a lead. Fiji’s Ana Baleveicau bronze medallist in the 400m hurdles collected the baton some 30m ahead of ToeaWisil and the crowd was on its feet as Wisil collected the baton from Adah and set off in pursuit. The PNG star was already on the Fijians shoulder with 200m to go and after a brief pause to collect her breath, Wisil powered away with an amazing burst of speed to win the seventh PNG gold of the evening and her own fourth of the Games. .

Whilst the PNG mensteam on paper were clear favourites their athletes had already run multiple events and would face a strong challenge from a Fiji team running on fresh legs and anchored by Tabakaucoro. The race generated similar excitement to the womensas Kaminiel Matlaun and Theo Piniau build a lead for PNG’s anchor Nelson Stone. However that lead was closed very quickly by Tabakaucoro who was already on Stone’s shoulder with 200m to go. Instead of taking a pause and settling in behind Stone to prepare for a battle in the finishing straight,  the Fijian tried to maintain the same pace but could not do so for the full 400m. Stone responded and powered away to send the home fans delirious with another gold for PNG.The crowd had certainly had their money’s worth and many independent observers including Pacific Games Council Members were full of praise for the presentation and delivery of a fantastic night of Athletics, the likes of which had not previously been seen at a Pacific Games.