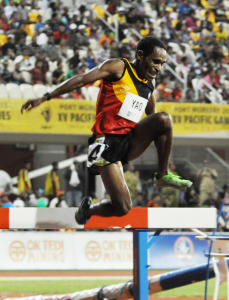 PNG has made a great start to the Pacific Games with 16 medals after the first two days including six gold , five silver ,and five bronze. Veteran steeplechaser Sapolai Yao led the way on Monday night with a trademark display of front running with only team mate Skene Kiage being able to stay close to him over the first 2km. However a surge with two laps to go secured the gold for Yao who was roared home by a patriotic home crowd in 9min 35 with Kiage picking up silver.Tuesday evening was a memorable session of athletics in a stadium packed with 15000 spectators many of whom were there to see Toea Wisil in the 100m. They were not disappointed as PNG’s athletes put on a great show collecting five gold three silver and four bronze. KaminielMatlaun won a dramatic 800m final by just 2/100 ths of a second after fighting off a strong challenge by defending champion Adrien Kela of New Caledonia. Donna Koniel cruised home in the womens 800m and RellieKaputin led a clean sweep for PNG in the womens high jump setting a new national record of 1.77m in the process. PNG won the decathlon for only the second time in Pacific Games history as Robson Yinambe continued the fine form he showed on day one to accumulate a personal best 6288 points. Fittingly ,ToeaWisil sent the home crowd delirious by comfortably winning the 100m.