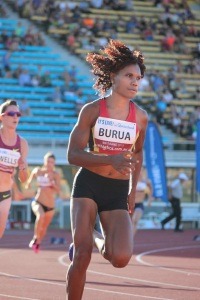 A number of PNG athletes turned in top performances at the Australian national Championships in Brisbane last weekend with Betty Burua twice breaking the national record in the 400m hurdles. Toea Wisil’s scintillating 100m run to claim the silver medal in a personal best time of 11.40 seconds came shortly after Burua became the third different athlete to hold the womens 400m hurdles title in just 8 days  with  time of  58.80 seconds eclipsing the 59.16 sec run by Donna Koniel  in Melbourne on March 29. The Tolai lass who won 5 gold medals at the Mini Games in Wallis & Futuna went even better in the final with a magnificent run to win the bronze medal in 58.02 seconds. Not only is this another PNG national record but it eclipses the best time ever time run by  a South Pacific Athlete , a distinction held by Vanuatu’s Mary Estelle Kapalu  with her time of 58.68 secs at the 1996 Olympic Games in Atlanta

Robson Yinambe produced a great result in the decathlon, amassing 5775 points over the ten events including six personal best performances and his fastest ever 100m clocking ( 11.29secs with a following wind of 2.9mps). Fellow New Irelander  and fast improving hurdler Wesley Logorava clocked a big personal best of 15.30 in the 110m hurdles. Veteran  Helen Philemon who is now turning her attention to the multi events scored 4231 points in her first heptathlon which is just 43 points below the best performance by a PNG athlete last year

Young Martin Orovo from Popondetta who was only identified at the PNG Games last November continues to raise eyebrows with his remarkable improvement, this time clocking 1min 54.71 secs in the 800m to head the 2015 PNG rankings in this event and become the eighth fastest 800m runner  in PNG history. Veteran steeplechaser Sapolai Yao ran his best time since 2007 and his third best ever with a clocking of 9min 37.34 seconds.

It was not a good weekend though for Nelson Stone as his disappointing 400m form continued and he pulled up in the 200m semi final on Sunday with a groin strain. Stone, who has been running fairly well this season in the 200m with his  best time being a slightly windy 21.23 secs could only watch from the stands as Fijian Banuve Tabacaucoro silenced the home crowd as he won the gold medal with a phenomenal run of 20.63 seconds, a massive improvement in his personal best , Fiji record and best ever by a south pacific athlete.