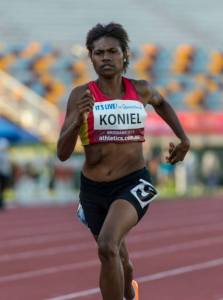 Donna Koniel has further improved on the National 400m hurdles record that she set at the Queensland Championships two weeks ago. Running in Melbourne on Saturday night in a high profile race won by Australian Champion Lauren Boden, Koniel placed fourth in the time of 59.16 seconds to shave 0.40 seconds from her record set in Brisbane on March 7. Further good news for PNG was a huge personal best for 400m specialist Betty Burua who clocked 59.80 secs in the same race.

With the Pacific Games just over three months away PNG  is now in the enviable position of having three sub 60 second  female 400m hurdlers. Sharon Kwarula who has a personal best of 59.77 seconds has her first race of the year over this distance at the Texas Relays on Friday.

A total of 18 athletes will participate in the Australian National Track and Field Championships in Brisbane this weekendi.  Apart from elite athletes ToeaWisil , Nelson Stone , Burua and Koniel  PNG will be represented in a wide range of events as several groups of athletes reach the climax of a period of training and competition as part of their build up to the Pacific Games. A middle and long distance group of five athletes led by veteran steeplechaser Sapolai Yao flew from Adelaide to Brisbane today after fine tuning their preparations under coach Peter Deane. Robson Yinambe , Eunice Steven and Helen Philemon will be competing in the decathlon and heptathlon respectively after a period of training with coach Phillip Newton. Jumpers Peniel Richard ,Karo Iga and Bonaventure Polau will also be participating in the Championships . Young up and coming hurdlers Wesley Logorava and Peniel Joshua will be competing in their first Australian championships. The championships commence tomorrow and conclude on Sunday.