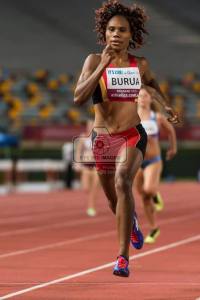 Something very special has happened for PNG Athletics in the heats of the Women’s 400m Hurdles this afternoon.  With the National Record holder Donna Koniel and Betty Burua being drawn in the same heat, the race was on.

Burua was unhappy with her race in the 400m Heats (55.49) the night before and was out to atone for what she perceived was a poor performance.  The gun fired and that was all the ammunition Burua needed to explode away from the field and reach Hurdle one in the lead.  That wasn’t enough though.  The fire was still raging from the night before and she wanted to take out all her frustrations on this race.  Burua went through the first five hurdles with her very raw technique being just good enough to not smack a hurdle.  This time, fatigue did not set in on the top bend and still she pulled away from the field.  Donna Koniel worked tirelessly to try to stay in touch with Buruabut faded to 3rd in the last 60m, with a time of 61.02.  Heartbreakingly, this placed her 9th overall and she will not progress to the Final.The ultimate result for Burua – a new Papua New Guinea National Record of 58.80, eclipsing the record of 59.56 set just two weeks ago by Donna Koniel.

Athletes in action on the first two days of the Championships werePeniel Richard in the Triple Jump, young Peniel Joshua and the seasoned competitor Nelson Stone in the 400m, Donna Koniel, Martin Orovo and Freddy Hongoworie in the 800m heats, Jane Pulu in the Javelin, Idau Asigau in the Long Jump and PNG’s three Combined Eventers, Robson Yinambe (Decathlon), Helen Philemon and Eunice Steven (Heptathlon).

Peniel Richard took to the runway for the Triple Jump and recorded a 14.40m best jump, just centimeters shy of his recent personal best of 14.49m.

Martin Orovo settled in to a good position in the first lap of his 800m heat and finished with a personal best time by almost two seconds (1:54.71). Freddie Hongoworie started well but faded in the second lap to finish in 2:01.61, just outside his season’s best time. Both have improved their racing tactics in the recent series of races.

Peniel Joshua got caught up in the excitement of racing the more seasoned competitors from Australia.  He raced with the top three competitors of the field in the first 200m and couldn’t match it with them in the second half of the race.  Joshua was excited by the experience and finished just outside his PB with a time of 50.40.

PNG Team mate Eunice Stevens has been battling a thigh injury for most of the past year and despite interrupted training blocks, her score of 4096 points was just 107 points short of her current personal best.

Peniel Joshua lined up again on Friday for a 400m event, this time negotiating the ten hurdle barriers.  His two week old personal best of 53.76 appeared under threat in the warm-up where he looked very sharp.  Alas, he landed awkwardly off Hurdle four and struggled to regain momentum, finishing with a time of 55.38.

IAAF Scholarship holder Donna Koniel will have gained valuable multiple race experience to take with her to the 2015 Pacific Games when she lined up for the 800m heats just two hours after her 3rd placed run in the 400m Hurdles.  Koniel was well off her personal best, running the heat in a time of 2:18.10.

Jane Pulu looked somewhat uncomfortable today in her Javelin competition, landing the spear at just 30.39m, well down on her PB of 38.92m. She will head to Townsville this week for specialist throws coaching.

In the sprint events on Friday, Wesley Logorava and ToeaWisil took to their blocks in the 100m Heats.  Logorava did not progress to the semi-finals, but cemented his recent run of performances in the low 11s range with a 11.06 into a head wind.  His best performances over the past four weeks have seen him run 11.00 twice and edges him ever closer to that elusive goal of running in the ten second range.

ToeaWisil lined up in Heat four of the Women’s 100m event where she watched from behind as Australian record-holder in the event Melissa Breen (11.50s), Olympic Gold Medallist Sally Pearson (11.63s) and Commonwealth Games competitor Ashleigh Whittaker (11.63s) all cruised to victory in their heats.  Unfazed, Wisil started like a rocket from lane 2 and was never challenged, stopping the clock at 11.62s.  This makes for some exciting racing today when the semi-finallists will line up at 5:45pm and the Final eight competitors will race at 7:30pm.

The 93rd Australian Athletics Championships are being live-streamed on the Athletics Australia website.