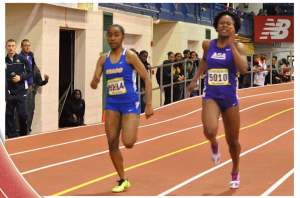 Five PNG athletes head to Albuquerque, State Capital of New Mexico this week for the National Junior College Indoor Track and Field Championships. John Rivan and Theo Piniau will represent Southwestern Community College in the 60m sprint and 400m respectively. Rivan has been in great form this season clocking a best time of 6.84 seconds and has been given the all clear to compete after pulling up with a twinge in his hamstring at the Regional Championships two weeks ago. Piniau is slowly getting back to the form that saw him running 49.00 secs flat at last years Indoor Championships in New York.

Rellie Kaputin will compete in the long jump on Friday evening and goes into the Championships ranked third in the country in Junior College Competition as a result of her national record breaking 5.79m jump two weeks ago. On Saturday she will take part in the Triple and high jumps in which she is ranked fourth and tenth respectively. Adrine Monagi  will compete in the five event pentathlon and is currently ranked second in the country. Kalama Towarap will run in the distance medley relay for Northern Iowa Area Community College. Twenty Colleges from around the USA are confirmed to participate in the Championships.

Meanwhile Sharon Kwarula is in great form with the NCAA Division two national championships approaching. Competing in Lubbock last weekend she ran a Lone Star Conference record time of 7.87seconds in the 55m hurdles and another indoor personal best 400m of 57.06 seconds