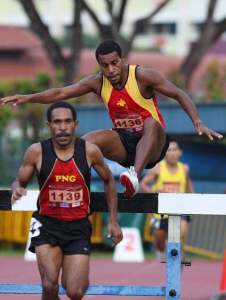 PNG’s squad of long distance runners have made a great start to their competition programme in Adelaide, setting numerous personal bests and two national junior records. Top performances to date are a sensational 18min 30 seconds run in the 5000m last Saturday by 15 year old Ongan Awa, taking 15 seconds off the national junior record set by team mate Mary Kua at the PNG Games. Kua herself was in great form three days earlier when she totally smashed her own national junior record in the 10000m by almost a full minute and became only the second woman in PNG Athletic history to run the distance in under 40minutes. Her time of 39min 57 seconds would have ranked Kua second in the Pacific last year behind Sharon Firisua from Solomon Islands who headed the rankings with a time of 39min 06 seconds run at the Commonwealth Games. With Ongan Awa and Miriam Goiye both also running under 40min 30 seconds in Adelaide the PNG squad will be optimistic of closing the gap that has existed at the Pacific Games for many years between athletes from the French Territories and the PNG girls.

On the mens side Simbai Kaspar has continued the great form that he showed in Goroka prior to departure with a string of personal bests in the 3000m (9min 07 secs); 5000m (15min 49); and 10000m (33min 03 secs). Skene Kiage also had a good result in his first race in the 3000m steeplechase, clocking 9min 57 secs. Several other members of the squad are expected to join the group in Adelaide as soon as their travel documentation is in order. These include middle distance runners George Yamak, Martin Orovo, Tuna Tine, Bala Nicholas and others, together with young distance runners Abel Siune and Rama Kumilgo.