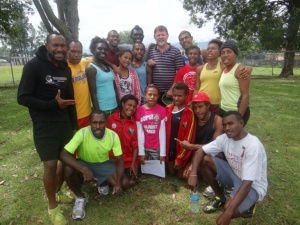 Nine members of Athletics PNG’s  middle and long distance squad  together with coach Bernard Manau head to Adelaide today  where they will take part in a series of local competitions culminating in the South Australian Track and field Championships at the end of the month.  Head middle and long distance Coach for the Pacific Games Peter Deane will welcome the athletes to his home town where he has a varied and interesting  training and competition programme lined up for the athletes. Adelaide has lots of parklands and trails which provide a stimulating training environment for distance runners

The athletes are Kupsy Bisamo, Skene Kiage, Simbai Kaspar, Veherney Babob, Jenny Albert, Mary Kua, Ongan Awa and Miriam Goiye. They will be joined in Australia by veteran Sapolai Yao who has just returned from the USA. Several other members of the squad are expected to join this group towards the end of next week when their travel documentation has been finalized. The athletes have been in camp at NSI since the beginning of December except for a short break at Christmas and are really looking forward to taking part in some good competitions.

Coach Deane in a recent progress report on the squad’s preparations for the Games said he was pleased with the way the team was shaping up and looking forward to seeing them compete. Deane made special mention of Goiye who said has shown excellent leadership qualities during the camp and has been a great role model for the young athletes. The 30 year old mother of three made her international debut as a fifteen year old at the Oceania Championships in Adelaide just prior to the Sydney 2000 Olympic Games and made a successful comeback last year winning a silver and a bronze medal at the PNG Games.

Athletics PNG President Tony Green thanked the Government for funding the programme under the G4G programme and the Sports Foundation for their support for the squad through the National Sports Institute. The team will stop by in Brisbane for a few days on their return in order to participate in the Queensland State Championships from 5 to 8 March. Upon their return the squad will go back to their base at NSI to prepare for the National Championships and Pacific Games Selection Trials in Lae from April 17 to 19