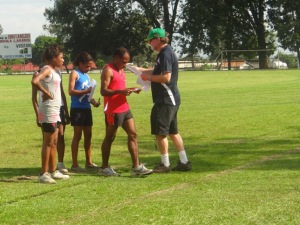 Following a highly successful PNG Games Athletics competition 50 athletes and 10 coaches are now at NSI in Goroka attending a two week training camp thanks to the support of the Institute which is providing free accommodation and the PNG Sports Foundation which is covering the meal costs.

Athletes were selected for the Camp by the Head Coaches for each event group and their brief in doing so was to identify those athletes considered most likely to make the 2015 Games Team based on what is already known about athletes in the training squad and performances at the PNG Games. Some previously unknown athletes are included in the Camp  including Rama Kumilgo (womens steeplechase), AzuriaKasu  (Arob -  half marathon) , Martin Orovo  (Oro -  middle distance) , Bonaventure Polau (Manus – high jump) and Timothy Maggie (Morobe – mens Javelin).

The camp has a number of objectives including to establish and develop relationships between athletes and coaches; to draw up training programmes for each athlete up to the Games; to conduct fitness and injury assessments; enhance the athletes understanding of the principles of training; to prepare them for life in the Games Village; and to develop the athletes competitive skills. Training sessions will include group training sessions; event specific training ; athlete interviews; fitness testing ; educational workshops and general squad meetings. The selection policies of Athletics PNG and of Team PNG as a whole will be distributed to athletes.

Athletics PNG President Tony Green stressed to all training squad and development squad members that selection for the Games is still open to any athlete who comes up with the required performancesnext year and that non selection for the Camp does not mean its all over. “the focus at this time is on those athletes most likely to make the team”.Things can and will change over the next five months so all athletes are encouraged to work hard and perform their best at the National Championships which will be held in Lae from April 17 to 19 . Green thanked the NSI  DirectorEdrisKumbruwah and Sports Foundation CEO    Peter Tsiamalili Jnr for their support for the Camp