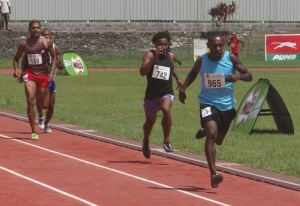 The 2014 PNG Games athletics competition was by far the best in the six PNG Games to date said Athletics PNG President Tony Green, not only in terms of how the event was run but for the new talent unearthed. A total of 808 athletes participated in the track and field events. A number of youngsters have been added to the Athletics PNG Development Squad following strong performances at  the Games including Nancy Malamut (ENB) , Lyeenn Nilmo (WNB) , Salome Yawas (Mor) , Isila Apkuk (ESP) ,).  Several new athletes have also been added to the training squad for the Pacific Games  including Patricia Torocan (Mor),   Bonaventure Polau (MAS,  Rama Kumilgo (Sim) , Azaria Kasu (Arob)   Martin Orovo  (Oro), Cornelius Paskar (ENB), Timothy Maggie (Mor)  and Kelvin Pokel (ENB).

Malamut and Nilmo both did well in the womens 100m to finish second and third respectively behind Helen Philemon, with Malamut going on to win silver in the 200m. 16 year old Apkuk produced a surprise in the womens 400m winning the bronze with a great time (61.83secs).  Unknown Kumilgo was the winner of the first ever womens steeplechase race in PNG with  a very respectable time of 12min 03 secs. Athletics PNG officials were delighted to see former National Rep , 30 year old mother of three and Engan Team Manageress  Miriam Goiye leading her team by example with a 4th placed finish in the 800m followed by bronze in the 1500m and silver in the half marathon. Markham Valley high school student Torocan was the surprise winner of the womens high jump with 1.55m over the experienced Delilah Kami and Nellie Leslie who tied for second place. Simbu’s Bala Nicholas had a good games with a big personal best of 4min 57 secs to win the 1500m from team mate Jenny Albert and a third place finish in a very good 5000m race.  Annie Topal won a very close triple jump competition from Nicole Lee and Maryanne Tutuai and Jane Pulu won the womens shot with a big personal best of 10.97m.  Morobe’s Eunice Steven lived up to her reputation as the Iron Lady of athletics with another gutsy performance to win the heptathlon with a personal best points score of 4120. Even whilst the seven event heptathlon was going on , Steven took time out to win the womens javelin from favourite Jane Pulu with another personal best of 37.38.

NCD’s Idau Asigau won a closely contested long jump from Central’s Karo Iga and Wesley Tapak whilst his team mates Albert Karo  and Debono Paraka won the shot put and discus respectively. Unknown Morobe athlete Timothy Maggie won the mens  javelin with a very good 56.01m.In the mens track events Nazmie Lee Marai of NCD upstaged Kupun Wisil to won the 100m whilst the 200m title was taken out by ENB’s rising talent Charles Livuan who was the clear winner in what was his seventh race of the Games. Unknown runner Martin Orovo  from Oro province attracted attention with a 4th placed finish in the 800m behind three national reps and placed 6th in a high quality  1500m final.  Two rising stars of Athletics, New Irelands Penniel Joshua and EHP’s  Penniel Richard both produced top performances in the 400m hurdles and high jump respectively. Joshua earned rave reviews from the visiting overseas coaches with an outstanding 55.10 seconds whilst Richard won a great high jump competition with 1.95m. Cornelius Pascha from ENB lived up to the potential he showed at the talent ID camp in January with a massive personal best of 1.90m for second place. Coach Phillip Newton was also highly impressed with 17 year old raw talent Bonaventure Polau of Manus and selected him for the Pacific Games squad training camp. Another East New Britain athlete seen at last years Talent programme Kelvin Pokel  upstaged National Record Holder Mong Tavol and Patrick Hou in the mens triple jump by winning gold with a jump of 14.15 metres.

Robson Yinambe of New Ireland would surely have set a national record in the eight event Octathlon but for the fact that the 110m hurdles was run with hurdles at the 99cm height. His points total of 5185 was almost 200 higher than the National record total of 4992 points held by Reginald Monagi.  Mary Kua of Simbu set a national junior record in the womens 5000m with a time of 18min 45 seconds . The previous record was  18:48 set by Poro Gahekave at the 2007 Pacific Games.  In terms of overall medal tally the 2014 Games saw the medals shared around in athletics more than in previous Games. Although ENB retained its title with 14 gold , Morobe had 8 , Simbu 7 and NCD  5