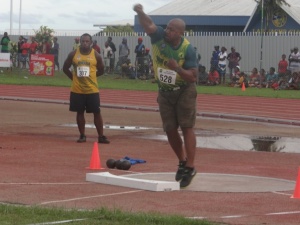 Saturday 22 November. The PNG Games Athletics competition  got underway in Lae under clear blue skies and in front of a packed and very colourful crowd at the Sir Ignatius Kilage stadium. Kelvin Pokel of East new Britain caused an upset in the mens triple jump by taking the gold medal with  14.15m from Mong Tavol (14.00) and Penniel Richard (13.91). Thethree  mens 400m hurdles semi finals were all won by athletes from New Ireland with Raymond Koniel the fastest in 56.04. Albert Karo led the way in the qualifying round of the mens shot put with 13.47metres whilst Jane Pulu posted the best effort in the womens qualifying round with 10.47m. Lily Poroli led the qualifiers in the womens discus with 31.12m. In the distance events Ongan Awa was the clear winner in the womens 10000m with a time of 41min 39.19 secs from team mate Allenda Jerry (42.39). The mens 5000m was a closer race with Simbu’sKupsy Bisamo holding off a strong challenge from Abel Siune and Simbai Kaspar to win with a time of 16min 07.42 secs. A total of   56 starters  in the mens 100m and  46  in the womens 100m meant  that four rounds were necessary.Helen Philemon and LyeennNilmo of West New Britain emerged as the fastest qualifiers for the womenssemi finals both clocking 13.08 secs into strong headwinds. KupunWisil was the fastest mens qualifier in 11.20 secs with not much separating the other main contenders.