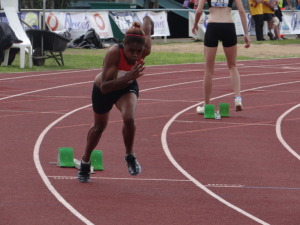 (IAAF) and will leave for the Gold Coast after the PNG Games. Koniel whose main event is 800m is also a very competent 400m runner and 400m hurdler and has won medals in all these events at the Pacific Games.

Athletics PNG President Tony Green in welcoming the news and thanking the IAAF for its support said that the scholarship is initially for nine months to the end of July 2015 but expected to be ongoing for the forseeable future , as long as Koniel stays healthy and performs well.

Koniel will stay at the Oceania  HPTC  and will be coached by  Glynis Nunn Cearns whose training group includes Betty Burua and the australian under 18 champion for 800m Alina Tate who has run 2min 08 seconds this year. Other members of the training group are Alex Beck the Australian 400m champion in 2013 as well as the Queensland womens 400m champion from 2013.

Koniel thanked her coach Lloyd Way for his help in bringing her this far and said she was looking forward training at the Gold Coast  in preparation for the Games next year.