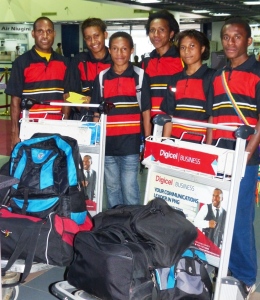 The PNG Athletics team to the Oceania Cross Country Championships in Guam returned to Port Moresby this morning after a very successful trip. Both Simbai Kaspar and KupsyBisamo made a strong showing in the open mens 12km race in which athletes from Australia and New Zealand placed first and second respectively. Kaspar just edged out Bisamo  by a margin of two seconds for the bronze medal with a time of 42mins 56, in a finish reminiscent of the exciting 5000m race between these two at the National Championships in Kokopo.

Young Mary Kua ran very well in the open womens 8km race to finish fourth in a time of 35mins 07 seconds ,behind athletes from Australia , New Zealand and Tahiti.

Jenny Albert easily won the Junior womens 6km event which had only a handful of  competitors, in 25 minutes 16 seconds. Both Abel Siune and Ongan Awa did extremely well to finish  in overall third and fourth places respectively in the  Youth (U18) events which were combined with the Asia Pacific Invitational Race. The two youth races attracted the largest fields with over 100 runners in each of the boys and girls races. Awa clocked a time of 19mins  11secs  and Siune was only 10 seconds  behind the winner of the boys race with a time of 15:42. Both were presented with gold medals for being the first Oceania athletes to cross the line.

Team manager Philip Kamane said he was very proud of the young athletes, especially 14 year old  Siune who was competing against athletes aged 16 and 17

Following the Cross Country event , the PNG  mens team won the annual Guamkomo half marathon road relay on Sunday morning 19 October in a time of 1hour 08 min 32 seconds. However due to their late and unofficial entry for the race, the team were not eligible for prizes.