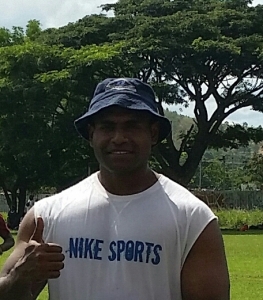 Debono Paraka smashed the 24 year old PNG National Record for the discus throw in Port Moresby on Saturday. In the last competition before this weekends National Championships in Kokopo , Paraka threw the 2kg discus 48.24 metres to better the previous record of 45.62metres set in april 1990 by Eric Momberger  in  Norman , Oklahoma.  Paraka, who was identified in December 2013 through the PNG Sports Foundation funded Talent ID programme run by Athletics PNG has been threatening to break the record for some time, as he has consistently been throwing over 45metres in training. Coach Paul Bannister said that Paraka should be proud of his achievement and that there was still plenty of room for improvement as they have only been working together for a short time Paraka is one of three throwers who will be travelling to the Cook Islands in three weeks time for the Oceania Championships and are looking forward to gaining valuable international competition experience. Athletics PNG will also be entering athletes in the Octathlon and Heptathlon events as part of its development programme towards next years Pacific Games