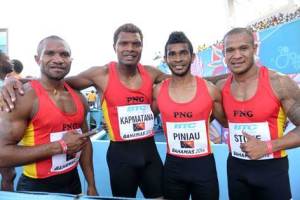 The PNG Mens relay squad returned from the Bahamas this week after competing in the inaugural IAAF World Relay Championships. US based Theo Piniau and Kevin Kapmatana were joined by Nelson Stone and Kupun Wisil for the 4*200m relay. Wisil and Stone had competed in some lead up meets in Texas before travelling to Nassau.  The race ended in disappointment as the team was disqualified for a rule infringement on the last exchange when Stone took the baton from Kapmatana just over the end of the permitted changeover zone. However the teamwas encouraged to learn from the IAAF later that they had crossed the line in 1minute 25.32 seconds which is equivalent to a 40.80 clocking in the 4*100m relay or 3min 10 secs for 4*400m relay. Several teams botched their baton changes and failed to finish, including the Jamaican mens 4*400m relay and both the USA mens 4*100 and 4*200 team, so PNG was not alone.

Athletics PNG President Tony Green said that he was pleased with the time and it was good effort from the boys. He said that this event gives athletes who would normallynever have the chance to compete at a world championships, the opportunity to be part of one “The exposure and the experience gained will certainly benefit them” headded. The highlight of the championship was the mens 4*400 relay final when the Bahamas, hoping to repeat their London 2012 success, took the lead from the USA on the second leg to a deafening roar from the home crowd and were still leading at the bell.  However the noise was reduced to respectful applause as La Shaun Merrit seemingly effortlessly eased past the Bahamian anchor runner in the home straight  to clock an unofficial 43.8 second lap and  win gold for the USA.