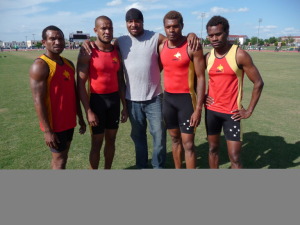 The PNG mens team to the IAAF World Relay Championships arrived in the Bahamas today after a confidence boosting final trial competition over 300metres at their pre departure base in Texas. Both Nelson Stone and Theo Piniau ran faster than the national record for hand timing of 33.9 seconds shared by Subul Babo , Peter Pulu , Baobo Neuendorf and Geoffrey Bai . Stone had to dig deep to hold off a strong challenge by their form Theo Piniau to get to the line first in 33.6secs.   Piniau who set a personal best 47.68 secs in the 400m last weekend was a very close second in 33.7 with Kevin Kapmatana also running a personal best  of 34.4 to finish third. Relay Reserve Joe Matmat clocked 35.4 in his second race after an injury enforced break from competition. Athletics PNG President Tony Green said that since this was a time trial rather than a formal competition, Stones time of 33.6secs needed to be ratified by Athletics PNG before being recognised as a new national record.

The athletes will compete in the 4*200m relay on Saturday evening in the Bahamian Capital city of Nassau.  A total of 47 countries have nominated to participate in this first edition of the IAAF World Relay Championships, which will also be held in the Bahamas next year. The PNG squad are due back home on May 29 with their next major event being the National Championships in Kokopo  on the weekend of June 6 to 9.Green predicts some very strong competition this year in the mens 400m with National record holder Stone facing a stiff challenge from a fast improving Theo Piniau and with Kevin Kapmatana also getting back to his best form. “Add in another fast improving youngster in Kamniel Matlaun our mens 4*400m relay is looking stronger now than it has for many years” said Green