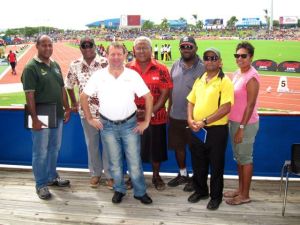 Athletics PNG sent a delegation to Fiji this past weekend to observe the running of the national secondary schools athletic championships, better known as the Coca Cola Games. The Games have become one of the biggest sporting events in Fiji and are fiercely contested, which results in some very good performances. Competitions are held in 17 zones around the country through which athletes qualify for the National Final either by placing in their event or by reaching a qualifying standard, and this years final saw 2800 athletes taking part.

Athletics PNG President Tony Green said that PNG would benefit immensely from a similar programme, however delegates all agreed that the concept should be trialed on a regional basis first. “We have to start in a small way” said Green and build from there. He thanked the National Department of Education through Dr. Eliakim Apelis for recognizing the value of a school based athletic programme and said Athletics PNG was looking forward to working with the Department in implementing one or two Regional Championships to start with. Green also thanked Secretary of the Fiji Secondary Schools Athletic Association and chief organizer Vuli Waqaand his Committee for their assistance and kind hospitality during the visit.