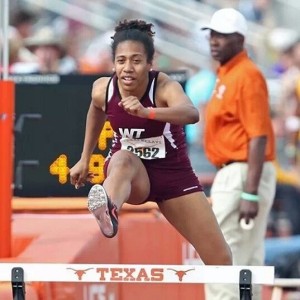 Sharon Kwarula smashed her own national record in the 100m hurdles by a huge margin on Saturday at the University of Texas, San Marcos. Her timing of 13.88 seconds was almost half a second better than her previous record of 14.31.  There were signs on Saturday that this was coming when Kwarula ran 13.94 at  the 87th running of the annual Texas Relays in Austin with only the wind reading of +2.5metres per second ruling out a new record. Kwarula also broke her own national record in the 400m hurdles with a time of 60.53 seconds on Friday at the Texas Relays. This brings to four  the number of new national records set by PNG athletes this year, with Toea Wisil running 7.46 seconds in the 60m last month and Wala Gime running 14.37 seconds in the 110m hurdles last week.  Gime’s great form continued on Saturday when he clocked 14.29 seconds at the Texas Relays. However the following wind was measured at 2.4mps and anything over 2.0 means the time cannot be ratified as a record.

Meanwhile Toea Wisil was in action again in Brisbane on Saturday night and ran second to Australian and Olympic champion hurdler Sally Pearson in the 100m with a timing of 11.58 seconds. An uncharacteristically slow start hampered Wisil and though she ran superbly to haul in the rest of the field it ruined her chances of a season’s best time.

Nelson Stone posted season’s best times of 10.70 seconds in the 100m and 21.40 in the 200m. Mowen Boino clocked time of 15.29 seconds in the 110m hurdles in preparation for the Australian National Championships in Melbourne this weekend, where himself, Wisil and Stone will be PNG’s representatives.