Rellie Kaputin is making waves on the Junior College circuit in Iowa, USA 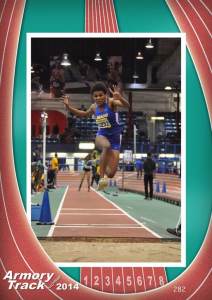 Rellie Kaputin is making waves on the Junior College circuit in Iowa, USA, posting National Indoor Championship Qualifying marks in the long jump, high jump and triple jump. The girl from Tinganalom Village in East New Britain is training at Northern Iowa Area Community College with nine other athletes from PNG in preparation for the Pacific Games in Port Moresby next year. Kaputin demonstrated her potential at the 2012 PNG Games and was encouraged to join the Athletics PNG Programme in Kokopo last year and was then selected for training in the USA.  “Rellie has improved in all three jumps and appears to have the National Long jump record of 5.75m in her sights” said APNG President Tony Green. She has jumped 5.59m already this season and has also done 1.63m in the high jump. Last weekend at Grinnell College, Rellie made a significant advance in the triple jump with a mark of 11.79m. She is really looking forward to the National Junior College Championships which will be held in New York City from March 6 to 8.

Meanwhile John Rivan and Theo Piniau have also both made a good start to the indoor season and have qualified for the National championships in the 60m event. Adrine Monagi is also aiming to qualify for the 60m event but her performance has been hampered by a knee injury. Her best time is 7.99 secs and she needs to run 7.80 to qualify for the individual event, but is very likely to make the school’s relay team. Veherney Babob made a good start to his 2014 campaign with solid runs over 600m, 800m and 1000m but a combination of bad luck, injury and sickness affected his last three competitions and he too is yet to hit a qualifying mark.