Wala Gime set a new national record of 14.37 seconds for the 110m hurdles 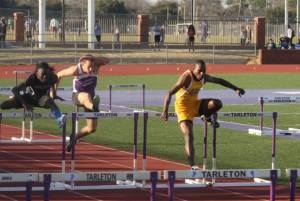 Wala Gime set a new national record of 14.37 seconds for the 110m hurdles event last weekend in Kingsville Texas. Running in the colours of Angelo State University, Gime reclaimed the record he lost to Mowen Boino at the 2013 Mini Pacific Games in Wallis & Futuna where Boino ran 14.58 seconds to win the Gold. "This is a big improvement in Wala's personal best" said Athletics PNG President Tony Green. "He started the season with a best time of 14.81 seconds and improved this to 14.66 on March 6 before taking this huge leap to 14.37".

Elsewhere in the USA Sharon Kwarula ended the indoor season on a high note with a personal best time of 8.64 seconds in the 60m hurdles and now turns her attention to the 100m hurdles and 400m hurdles outdoors.  A number of PNG athletes competed very well at the Junior College national indoor championships in New York recently. Theo Piniau was in great form, clocking a huge personal best of 49.00 seconds for 400m. Veherney Babob also performed with distinction, twice running 1min 56 seconds for 800m. Rellie Kaputin set another personal best of 5.73 metres in the long jump to come within 2cm of Lily Tua’s national record of 5.75m which has stood since 1991. Unfortunately Kaputin injured herself in the process and had withdrawn from the competition. Adrine Monagi clocked a personal best indoor time of 26.38secs in the 200m. The Northern Iowa Team set a school record in the distance medley relay with Priscillar John and Kalama Towarap assisting the team with unofficial split times of 59.9 secs and 2min 24 secs respectively for their 400m and 800m efforts respectively.