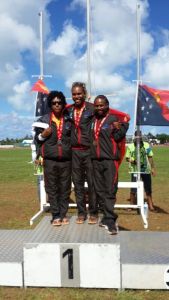 Skene Kiage had earlier given the team its first gold medal of the Games by winning the steeplechase in 9min 56.06 Seconds from team mate Sapolai Yao (9:57.35). Toea Wisil as expected was a comfortable winner of the womens 100m, breasting the tape in 11.66 seconds    Her older brother Kupun  followed up his outstanding first round run in the 100m with two more excellent runs, clocking 10.59 in the semi final and 10.60 in the final to win silver behind Banuve Tabacaucoro of Fiji.

Until Peter Pulu came on the scene 10.60 secs was the PNG National Record, held by Takale Tuna.  Wisil now ranks second on the PNG All time best performance list with his 10.59 being equal to Nelson Stone’s personal best.