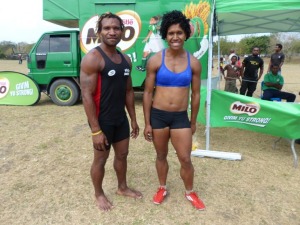 Almost 300 students from the National Capital District competed at the Milo Southern Region Athletic Championships at the University of PNG last weekend, along with the PNG National  squad which is in the Capital for a one week camp before heading to Wallis on Saturday. Strong winds made it impossible for athletes to run good times, especially in the 100m and 200m events where the headwinds were often 6 or 7 metres per second. That did not deter the athletes however and a number of keenly contested races were seen in all divisions.

Athletics PNG President Tony Green said it was good to see a large number of athletes competing in the throwing events, especially the Javelin and that good performances would be noted and followed up.He thanked the teachers  of Korobosea International School , Gordons Secondary, Goldie River Primary, Marionville, Gerehu Secondary , Pom International , and  Mainohana Secondary for bringing their students to the Championships.

Toea Wisil opted to compete alongside the men  in the 100m race and managed to hang on to the back of the pack as the race was won by her older brother Kupun.The mens 400m saw another impressive performance from Kaminiel Matlaun  who won clearly from Kevin Kapmatana and Paul Pokana.Some good races were also seen in the mens middle and long distance races with Andipas Georasi , his brother David ,  Kupsy Bisamo and Sapolai Yao  all running well in at least one event.

Shirley Vunatup impressed in the womens 200m, running away from the field to win by over half a second from Donna Koniel and Venessa Waro.  In the 100m sprint Helen Philemon just edged Venessa Waro with Yvonne Nelson of NCD in third.