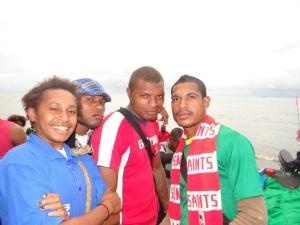 Utu secondary school in kavieng is gearing up for a large number of vistors tomorrow and saturday for the New Guinea Islands regional championships in athletics. 110 athletes arrived in Kavieng yesterday including almost 50 primary school students and 20 secondary school students from Kokopo.  It was a long day for the students with heavy rain in the morning delaying their boat journey from Kokopo to Namatanai by almost five hours.     Visitors also include  a national open and junior squad with seven athletes from Simbu, three from Goroka five from Lae , six from Port Moresby and twenty from Kokopo. These athletes will use the Kavieng Meet as a lead up to the National Championships in Kokopo from July 12 to 14 .

They have joined approximately 200 students from Kavieng, Namanatai and New Hanover at the Championships.There are teams of around 40 to 50 athletes from Utu secondary, Namanatai , and team New Ireland among other smaller groups. The event will get underway  between 3pm and 4pm today with 800m heats only for Open Men and  18 Men;  heats in the 400m and finals for the 3000m for open men and women. Nestle PNG through its MILO brand is supporting the Regional Championships and National Championships.