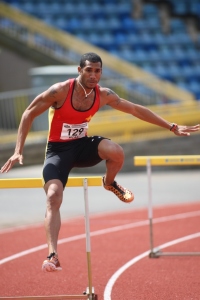 Mowen Boino delivered another top performance to win the gold medal in the mens 400m hurdles event at the Oceania Championships in Tahiti on Thursday evening to make a very strong case for selection for the World Championships in Moscow. Competing in what was his first race for almost a year the three time Pacific Games Champion edged Australia’s Leigh Bennet to stop the clock in 51.97 seconds to Bennet’s 52.08. “You’ve got to take your hat off to Mowen” , said APNG President Tony Green. “He lives in Vanuatu where there is no regular competition yet he can come out and run like this in his first race since the pre Olympic tour of the UK last year. 51.97 for 400m hurdles is equivalent to a 47.30 secs for 400m and that event was won in 48.44.”         Toea Wisil as expected claimed her World Championship spot by comfortably winning the 100m and 200m events.

Sapolai Yao won three medals at the Championships including gold in his favourite 3000m steeplechase in a good time of 9:49.67.  Yao only arrived in Tahiti some 18 hours before his first race (the 10000m) on Tuesday but won the bronze in 33min 44secs behind athletes from NZ and Australia; then came third in the 5000m on Wednesday. Meanwhile Nelson Stone struggled to find the form which he showed in London last year. In the 200m PNG’s top sprinter was no match for SP Games Champion Banuve Tabacaucoro   of Fiji  who broke Stones Championship record of 21.09 by 1/100th of a second running into a headwind. He was equally dominant in winning the 100m by half a second. Stone qualified for the final of the 400m but withdrew from the event citing injury concerns.