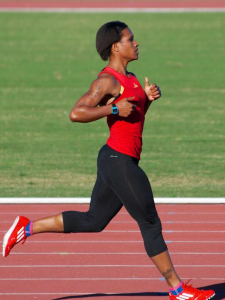 Toea Wisil goes into the Australian National Championships in Sydney this weekend full of confidence after her blistering runs last Saturday where she blew away the opposition in both the 100m and 200m at Australia’s Premier Track and Field Meet, The Melbourne Track Classic which is the first leg of the IAAF World Challenge.

The Nationals, being a championship event with large fields, could see three rounds in each event, with a first round, semi final and final unlike in Melbourne where the top eight athletes based on current form were invited to run in straight finals.

“Toea must be quietly confident of becoming the first Papua New Guinean to win an event at the Australian National Championships”, said Athletics PNG President Tony Green. We are not 100% certain, said Green but have consulted Statistician Bob Snow and we can’t remember any PNG athlete winning an event at the Australian Nationals. The likes of Takale Tuna and Mowen Boino have come close. Toea herself has won the U20 Championships but not an Open Title and Lillyanne Beining won the U18 Heptathlon back in 1991 or 1992.