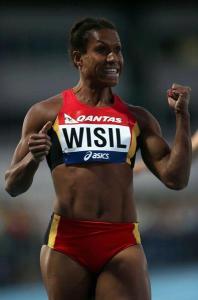 Toea Wisil blitzed the field in both the 100m and 200m events at the IAAF Melbourne Track Classic at the weekend with world class sprinting. Only unfavourable wind conditions prevented her from breaking national records in both events. In the 100m Wisil clocked 11.41 seconds to win clearly from Ashleigh Whittaker (11.72). This was into a headwind of 0.7 metres per second. With a slight following wind Toea would almost certainly have run faster than Mae Koimes 11.37 national record, said Athletics PNG President Tony Green. Wisil ran 11.27 in the Olympic Games but a following wind of 2.2mps was slightly over the maximum of 2.0 allowed for the time to be recognised as a record.

The best was yet to come from Wisil however and when she lined up for the 200m no one could have forecast what was to come as the PNG girl ran away from the field to stop the clock in 23.09 seconds.  This time the wind was  again agonisingly just over the limit at 2.1 and Wisil will have to wait for another day for the record books to reflect her true status as PNG’s best ever sprinter.

“National Record or not this was an awesome performance” said Green. “Second place was Monica Brennan in 23.79 seconds which gives some indication of what a dominating performance this was. Australia’s top sprinter Melissa Breen may have been out injured but that takes nothing away from Toea’s fantastic performance. This was the biggest meet on the Australian Calendar with significant prize money and Toea was dominant”.

Wisil now heads into the Australian National Championships in Sydney this weekend full of confidence and hopeful of good conditions.