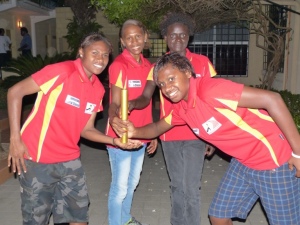 Toea Wisil blitzed the field in women’s 100m at the Queensland Track Classic on Saturday evening with a season’s best performance of 11.57 seconds. Hopes of a sprint double for the PNG girl were high as Wisil took to the track again later for the 200m. After a good first 150m however a little tightness in her hamstring caused Wisil to ease off towards the line and she finished third in a close finish in a time of 23.99 secs. In between her individual races Wisil teamed up with Venessa Waro , Shirley Vunatup and Donna Koniel for the 4*100m relay in which the PNG quartet clocked a time of 48.41 seconds.In the 4*400m relay Vunatup led off and handed to Koniel , with Waro running the third leg and Pauline Kupai bringing the baton home in a time of 4min 05.24 secs. The PNG girls are now looking forward to the Queensland State Championships which will be held over three evening sessions this week, commencing Tuesday at 6:30pm. Nelson Stone will also be in action in the 100m and 400m. Stone is just coming into good form and the State Championships will be his last competition  before  heading to Sydney for the National Championships (April 11 to 14). Wisil is however expected to feature strongly in the Melbourne Track Classic on April 6, the event which kicks off the IAAF World Challenge Series of events.