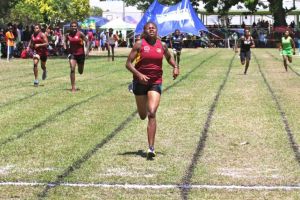 The track and field programme kicked off on Saturday with Donna Koniel winning gold for East New Britain in the womens 400m hurdles in a good time of 65.89 on a heavy track at Ulapia.

However the competition had to be curtailed   for safety reasons after two of the three scheduled heats in the mens 400m hurdles. Athletes were crashing into the hurdles due to the slippery conditions. The mens event will be re run on Monday afternoon. The wet conditions resulted in the cancellation of the 100m preliminary round as well as all field events and the 100m and 110m hurdles events. Only the mens 5000m and womens 10000m were conducted on Saturday afternoon.  Kupsy Bisamo , competing for Morobe looked to be in for a close battle with team mate David Georasi in the 5000m. Georasi and Goroka’s Simbai Kasper tracked Bisamo for 8 laps but were unable to hang on as the Simbu born runner surged away to wn by a comfortable margin.In the womens 10,000m Cecilia Kuman was much too strong for the rest of the field and almost lapped the second placed athlete, teammate Aina Goir as she clocked a very impressive 41 minutes ten seconds.  Unknown New Irelander Josepha Tapilas put in a very brave effort to finish third. The Namatanai secondary student responded to the support and encouragement of the crowd to complete the gruelling 25 lap race.

A total of 656 athletes were registered for the Games as of Friday evening, with the programme continuing on each day this week . The mens sprints as expected, attracted the largest number of entries, with 66 for the 100m and 62 for the 200m. The womens 100m has 51 entries and the 200m has 57. Big fields will also be seen in the longer events with 50 in both the mens 800m and 1500m  and 36 for the mens 5000m.All of the field events will need qualifying rounds as they all have between 15 and 35 competitors.All provinces are expected to be represented in Track and Field , said Athletics PNG President Tony Green, as  a few athletes arrived on Thursday and Friday from Enga , Sandaun , Gulf and Western Provinces.

More than 250  AWD  athletes have over the weekend  been added to the 656 registered for the able bodied events.

Monday will be a very busy day for the officials with heats in the 400m and 100m; the 400m hurdles, the sprint hurdles, 1500m , 5000m for women and 10000m for men. Field events will include Long jump and triple jump qualifying rounds  for men and women; qualifying rounds in all the mens throwing events as well as the discus and shot