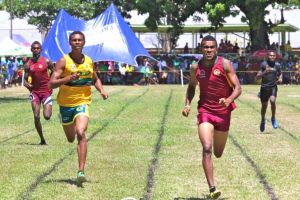 The Hurdles were always going to be of great interest as many athletes had been introduced to the event for the first time at these Games. It takes years of practice to perfect technique and achieve good times, so expectations were not high. It was all about looking for potential.

The Women’s 100m Hurdles was won by Helen Philemon (MOR) the only experienced hurdler in the field. Her time was 17.26 seconds. Second was Naomi Kerari (ENB) in 19.52 and third was Damaris Parom (ESP) in 19.64 seconds.

The only experienced hurdler in the Men’s 110m Hurdles was Reginald Monagi (MOR), but he lost concentration at the last hurdle, fell and then scrambled across the line in 3rd position. His time was 18.79 seconds. Surprise winner was ENB’s Rex Kuam with a time of 17.45 seconds, which sneaks him on to the All Time Best List. With Rex also being a competent jumper, might he be approached with a view to the Decathlon? Worth a thought. In second place was New Ireland’s Wesley Logorava (18.75 seconds).

The Men’s 400m Hurdles was won by Manuai Kenas (NCD) with a time of 57.97 seconds, good enough to elevate him to 16th on the All Time Best List. Second was NIP’s Raymond Koniel (58.14) and third ENB’s Jeffrey Luveana (58.98). Obviously all would have run much faster on an All-Weather Track as the uneven track made it almost impossible for the runners to achieve any form of regular rhythm.

Whilst Mowen Boino is confident about defending his title at the 2015 Games, we need to develop more hurdlers. Wala Gime has found a new lease of life in the 110m Hurdles event (breaking Raki Leka’s long standing National Record). PNG has owned the mens 400m hurdles Pacific Games Title since 1991 (Baobo Neuendorf, Ivan Wakit x 2 and Mowen Boino x 3) but we must make a special effort to groom three or four potential medal winners in the time we have available.

Norman Tse (ENB) then went on to win the Men’s Long Jump with a distance of 6.48m, defeating Wesley Takap (ENB) with 6.23m and Morobe’s David Jessem with 6.10m. Again, conditions for the Long Jump were very poor.

The Women’s 400m Final saw an ENB medal sweep. Winner was Donna Koniel in the fast time of 58.93 seconds - very good on this track. In second position was Tehila Womola (62.38) and third was Annie Muria (63.20). Things looked good for the ENB Women’s 4 x 400m with Betty Burua to be added to the team.

The Men’s 400m Final was a bit of an upset, with ENB’s Theo Piniau being the clear winner in 49.49 seconds from NCD’s Paul Pokana (49.97). Pre-race favourite, John Rivan (ENB) was third in 50.14 seconds. John had redemption in mind later in the day with the 200m Final and the Relays.

New face on the scene, George Yamak from Western Province, had stunned all with a withering 300m sprint at the end of his heat. Here, however, he went out from the start - a bold experiment in front running. His different tactic confused the field and they seemed to make no serious attempt to reel him in – or maybe they just could not! [The changed tactic was well-thought out by his handlers, Goa Koiti and Iroa Pamoa]. George stayed in front the whole way and was rewarded with a 1/100th of a second improvement on his personal best - which is now 4:12.40. Second was ENB’s Andipas Georasi (4:14.83) and third was EHP’s Simbai Kaspar (4:21.95).

The 100m Finals saw no real upsets, although the disqualification (for a false start) of fancied ENB athlete, Theo Piniau, did take a small amount of gloss off the Men’s race. It was won by Morobe’s Kupun Wisil (11.61) from NCD’s duo of Nazmie-Lee Marai (11.73) and Solomon Kaiap (11.92). The slow times were a testament to the track and the weather conditions.

And the scene was now set for the grand finalé - the Relays.

The Women’s 4 x 100m looked to be a race between ENB and MOR. The Morobe Team were probably stronger on paper, but all relay races are about the ability to get the baton around the track in the fastest and most effective manner – without dropping the baton or getting disqualified. East New Britain (Jacklyn Tika, Betty Burua, Shirley Vunatup, Donna Koniel)did that and relegated Morobe (Eunice Steven, Helen Philemon, Adrine Monagi, Venessa Waro) to second position - 49.54 to 50.49 seconds. A distant third was NCD (Orivia Maniana, Yvonne Nelson, Gwen Pokana, Priscilla Samuel) in 52.13 seconds.

The Men’s 4 x 100m Relay pitted three fairly equal teams together. Morobe, with four International runners, were marginally ahead of NCD (who also had four Internationals, including elite runner Nelson Stone), and ENB (with three International athletes). The form guide, however, had to take back seat to the slick passes of the host team and ENB (Abel Kennedy, Kevin Kapmatana, Theo Piniau, John Rivan) won narrowly, but clearly, over Morobe (Reginald Worealevi, Kupun Wisil, Henry Ben, Joe Matmat) - 42.43 to 42.60 seconds, with NCD (Nazmie-Lee Marai, Nelson Stone, Paul Pokana, Solomon Kaiap) in third position - 43.05 seconds. In the 4 x 100m Relay it is all about the quality of the baton changes.

The 4 x 400m Relays are an ever-changing roller coaster as 400m runners of varying standards take the baton and make-up lots of ground on weaker opponent, or lose ground to those who are stronger. In the Women’s race the ENB Team, (Donna Koniel, Tuna Tine, Shirley Vunatup, Betty Burua) though, did not give the other teams a chance as they quickly went to a huge lead on the first leg, and maintained it all the way. They beat Morobe (Trisha Gamini, Eunice Steven, Adrine Monagi, Venessa Waro) by more than 13 seconds - 4:03.56 to 4:16.83, with NCD (Gwen Pokana, Carol Ephraim, Leeanne Kwarula, Oriva Maniana) narrowly defeating NIP (Martina Martin, Stephanie Kager, Kathlees Tukasau, Esther Simon) for the bronze medal - 4:22.14 to 4:22.53.

The Men’s 4 x 400m Relay saw a different medalist sneak into the mixture. New Ireland (Herman Tobeno, Mesulam Tingiram, Elison Tuvi, Robson Yinambe) proved to be much stronger than the more fancied NCD and Morobe (Werna Kalin, William Marum, Brendan Johnson, Jerry Herman) Teams and they won the silver medal (3:30.12) ahead of the NCD (Nazmie-Lee Marai, Freddy Hongoworie, Manuai Kenas, Paul Pokana) Team (3:30.16). Way out in front, however, was East New Britain (Kevin Kapmatana, Theo Piniau, Kaminiel Matlaun, John Rivan) who had ensured that all their best available runners were ready to go for the gold, and they crossed the line first in the time of 3:25.60 to complete a Relay sweep for the hosts.