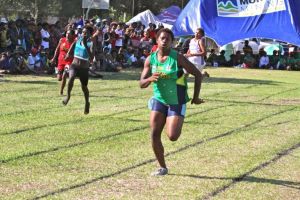 The heats of the Relays were held today and it was obvious that those Provinces that had regular Athletics competition would be the ones fighting it out for the medals. Morobe, NCD and ENB looked to have the field to themselves, except in the Men’s 4 x 400m were New Ireland put up a strong showing.

The rounds of the 200m continued with the athletes identified in the heats emerging as the favourites for the final. In the Women’s 200m Semi-Finals Venessa Waro (MOR) was fastest with a time of 26.82 seconds ahead of Helen Philemon (MOR) 27.19 and Shirley Vunatup (ENB) 27.27 seconds. The Men’s Paul Pokana (NCD) was the fastest qualifier with a time of 23.06 from John Rivan (ENB) 23.15 and Joe Matmat (MOR) 23.19 seconds. A fierce final was on offer.

The Women’s Combined-Event, the Heptathlon, started today with experienced Eunice Steven (MOR) the likely winner. Eunice ended up winning six of the seven disciplines over the two-day event and emerged as a clear winner. Her Javelin Throw of 34.49m was superior to the gold medal throw in the individual event. All told Eunice amassed 3672 points, as compared to her personal best of 3927 points from Townsville in 2011. Given the conditions, this PNG Games performance was quite good.

PNG now needs to convince many more young, athletic women to take up this event. With just over two years to prepare them for the Pacific Games, it is imperative that we identify potential candidates early in 2013.