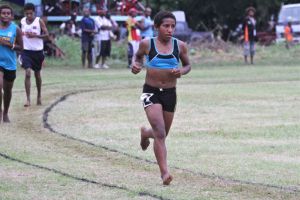 The Sunday was a rest day, and work was begun on the measurement of the Half Marathon Course, which will start near Vulcan and finish in the main Sports’ Complex at Takubar. With a huge backlog of events from “rainy Saturday” an early start was in order. Rain was again going to interrupt proceedings, but we had to continue. Poor conditions - the wet track and the strong negative wind, meant that performances were not as good as had been hoped.

The Octathlon began with the favourite, Reginald Monagi, going to an immediate lead winning three of the four disciplines on offer.

The 100m events had Preliminary Heats to select the unseeded runners for the First Round Heats held later in the day. After the Round One Heats the leading contenders for the 100m were Venessa Waro (MOR) and Adrine Monagi (MOR) for the Women, and Kupun Wisil (MOR) and Theo Piniau (ENB) for the Men. (Seven of the top 10 in the Men’s 1st Round had run for their country before. They represented Morobe, NCD, ENBP and EHP).

The heats of the 400m indicated a possible clean-sweep for the ENB Women with Donna Koniel, Tehilah Womola and [newcomer] Annie Muria being well clear of the rest of the field. In the Men’s, NIP’s Herman Tobeno was the fastest qualifier from ENB’s John Rivan and Theo Piniau.

The 1500m Heats saw Jenny Albert (SIM) clearly the fastest (5:09.47) from Kalama Towarap (WNB) and Poro Gahekave (ENB). Favourite, Tuna Tine (ENB) was content to just qualify in with a slow time. The Men’s Heats, however, saw one of the big finds of the PNG Games, Western Province’s George Yamak, run the race of his life to qualify in the excellent time of 4:12.41 and go to #36 on the All Time Best List. The manner of his heat run, with an explosive last 300m sustained drive impressed everyone. Early favourite, Andipas Georasi was 9 seconds slower. The final was one to be eagerly anticipated.

The Women’s Long Jump saw Eunice Steven (MOR) leap a creditable 5.16m to edge ahead of teammate Helen Philemon (5.07m). They were the only competitors over 5 metres. The condition of the runway and the strong negative wind made quality jumping very difficult.

With the light gone, and car headlights needed to shine a light on the race, the Men’s 10000m saw Kupsy Bisamo (MOR) complete the distance double with an exhausting effort in 34:56.37, which saw him temporarily hospitalised after the race. Here Abel came third in the time of 35:44.12. In second place was Bernard Kikile (ENB) showing that the host province could also produce good distance runners, when he clocked the time of 35:15.68 in his first ever 10000m track race. In third place was Abel Siune from Simbu, the 14 year old who had caused an upset by winning the Highlands Regional Championships in Goroka.