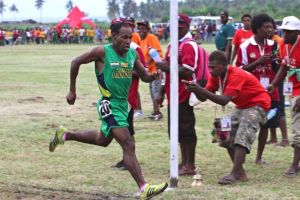 Competition started with the Women’s 400m Hurdles. Nouméa bronze medal winner, Donna Koniel (ENB) was the favourite and won handily in the time of 65.89 seconds. The rain had already started to make the grass track slippery and difficult for the athletes.

With nineteen men entered in the 400m Hurdles, it was necessary to hold three heats. The first and second heats were run under difficult conditions with many athletes falling due to the slippery track, which deteriorated as the rain got heavier. After two of the heats the rest of the hurdles, sprints, field events and Men’s Octathlon programme were suspended with the events to be re-scheduled on Monday morning. The two completed Men’s 400m Hurdles heats will be re-run on Monday to ensure an equal and fair playing field for all nineteen of the hurdlers.

The two distance races were held however and the mid-afternoon weather improved with the rain holding-off. The large field in the Men’s 5000m saw the field seeded and held in two timed-finals. Winner of the first of these finals was Bernard Kikile (ENB). The second race saw the favourites from Morobe, Kupsy Bisamo and David Georasi fight out the honours with Eastern Highlands’ Simbai Kaspar. Kupsy proved to be too strong and won easily (16:10.91) from Simbai (16:23.57) and David (16:37.77). In fourth place overall was the winner of the first race, Bernard Kikile (16:45.27). Had Bernard been in the main race he would almost certainly have run faster and possibly been in contention for the bronze medal or better.

The National Record for this event is still held by John Kokinai who started his career at Chanel College, Ulapia, in the 1970’s. His best time was 14:43.4, set on the grass track at Queen Elizabeth Park, Rabaul at the National Championships in 1972).

In fading light the Women’s 10000m event saw 12 athletes line-up at the start. The overwhelming favourite, Cecilia Kuman (SIM), worked her way to the lead and was never headed once she hit the front. The second place getter, Aina Goir (SIM) is a newcomer to the scene and her slight figure impressed all as she appeared to effortlessly run lap after lap in pursuit of Cecilia. Josepha Tapilas (NIP) was also a newcomer to this level of competition and although she ran a very uneven race, and at times looked to be almost ready to step of the track, she kept on finding a new lease-of-life and ended up defeating more favoured Simbu runner, Anna Pius.

The winner ran just a little slower than her personal best run in the National Championships in Lae in April, but on the heavy grass track at Ulapia, it was a better performance. Cecilia’s time was 41:10.60 would have placed her in 4th position in the 2011 Nouméa Pacific Games. Newcomers Aina Goir (42:17.60) and Josepha Tapilas (42:54.11) made good inroads into the All Time Best List for this event.