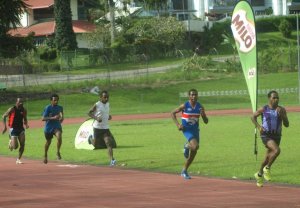 Over 150 athletes participated in a successful Milo Momase Athletic Championships held at the Sir Ignatius Kilage Stadium in Lae last weekend.Teams travelled from Bulolo , Madang and the Markham Valley to join Lae based athletes for a good competition ahead of the PNG Games.Highlights of the competition were strong performances from Helen Philemon in the 100m , 200m and long Jump; a great mens 3000m race between Kupsy Bisamo and David Georasi and the return to form of triple jumper Mong Tavol.

PNG’s top distance runner Kupsy Bisamo was pushed all the way to the line in the 3000m by David Georasi, less well known brother of PNG Rep Andipas Georasi. Bisamo was rewarded with a personal best time of 9mins flat and Georasi ran a massive personal best of 9:01. “This is a very significant result for David, said Athletics PNG President Tony Green,adding that the pair will compete again later this week at the Highlands Championship at NSI in Goroka.

Green congratulated the Morobe Association for staging a successful event and said that the results indicate that reigning PNG Games Athletic Champions Morobe will be a force to be reckoned with in Kokopo. “Hosts East New Britain will have to work hard to wrestle the crown from them, he added”.Morobe dominated the last PNG Games athletic competition, winning fourteen gold to fourth placed East New Britains four. The last of the four regional athletic championships will be staged at Utu High School in Kavieng on the weekend of 27/28 October.