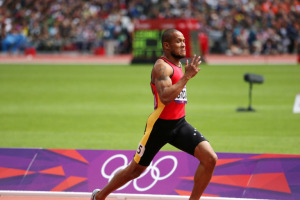 Athletics PNG had more to celebrate today as Nelson Stone ran by far his best 400m of the year in the Olympic stadium. Running in heat three alongside one of Europe’s best 400m runners Jonathan Borlee of Belgium, Stone ran aggressively from the start and was rewarded with a great time of 46.71 secs, just one hundredth of a second outside his national record set in the Commonwealth Games two years ago. It was a remarkable  run from Stone considering the injury setbacks he has faced this year.In March he suffered a groin injury on the eve of the Australian National Championships just as he was hitting peak form.Then just two weeks before the Olympics, a grade one hamstring tear seemed to put paid to any hopes of a top performance at the Games.However quick medical treatment and Stone’s renowned mental toughness saw him through and he once again delivered on the big occassion.