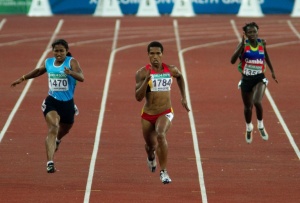 The PNG Sports Federation & Olympic Committee has announced the flag bearer for the 2012 London Olympic Games as Toea Wisil.

Toea is a two time winner and current SP Sports Award Female Athlete of the Year who is also the reigning Pacific Games Champion in the 100m, 200m and 400m. She also holds the national records for the 200m and 400m.

The selection as Team PNG flag bearer at the London Olympics adds another distinction to the increasingly impressive career of PNG’s current top female athlete. At the 2010 Commonwealth Games held in Delhi, India, Wisil reached the 100m final, eventually finishing in fourth place. At the 2011 Noumea Pacific Games, Wisil was the undisputed queen of the track, claiming 5 gold medals in a dominant performance, completing the sprint treble. She then backed up to be a part of the victorious 4*100m and 4*400m relay teams.

Chef de Mission, Syd Yates, said it was hard to look past Wisil as the flag bearer for Team PNG as her story epitomises the magic of how sport can transform lives, “To think that less than ten years ago Toea was running barefoot at the 2003 PNG Games and now will be leading Team PNG as the world watches, carrying the flag at the opening ceremony is the stuff of fairytales. Her determination and dedication to becoming the best she can be will culminate in London when she represents PNG at the highest level possible for an athlete, the Olympic Games.”

Wisil has been preparing well for the Games with consistent performances in competitions both in Australia where she was based earlier in the year with training partner the world’s number one female athlete Sally Pearson and in the UK where she is currently based for the final lead-up to the Games. Manager of the Athletics team to London, Tony Green is expecting Wisil to perform at her best at the Games, “Toea is clearly PNG’s top female athlete at the moment and with her recent performances she should be at her peak by the time she takes the track for the women’s 100 metres.” This will be the 5th time in the nine Olympic Games attended by PNG that the Sport of Athletics has had the honour of providing the Flag Bearer.