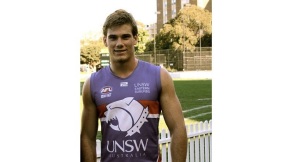 The AFL Sydney Round 14 Rising Star nominee is Kirk Lower of UNSW/ES.

Originally playing his football for Port Macquarie in the North Coast junior competition, Lower moved to the Bulldogs in 2014 playing mostly in the Under 19s side. Lower played 16 games for the Under 19s Division One side in 2014 and also made his Premier Division debut in Round 15 last year against Pennant Hills.

In 2015, Lower has cemented his spot in Premier Division this year playing mostly key position down back for the Bulldogs.

Lower played his best game for the Bulldogs on the weekend, beating his opponent in numerous one on one and rebounding the ball out of defensive 50. Lower was so impressive for the Bulldogs he was named at Centre Half Back in the Round 14 BLK AFL Sydney Team of the Week.

Kirk will be looking to finish the year off well and help UNSW/ES off the bottom of the ladder with a couple of wins.