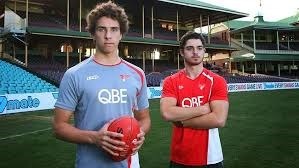 UNSW/Easts’ Jordan Foote was pre-selected by the Sydney Swans as an Academy pick, taken at the end of the ninth round (pick 76).

Foote, a ball magnet with elite running ability, will join NSW/ACT RAMS teammates Isaac Heeney, Abe Davis, and Jack Hiscox at the Swans, after the trio was selected through the Swans’ Academy system at last Thursday’s National Draft.

Another East Sydney junior Lachlan Langford, an athletic utility who can play a range of positions, was rookie listed by Hawthorn. Lachlan is the brother of Hawthorn premiership star and former UNSW/ES player Will and also son of Hawks stalwart Chris.

Another to be rookie listed was Ainslie NEAFL ball magnet Aaron Vandenberg who was picked up by Melbourne.

The addition of another four players to the AFL on Wednesday underscores a stellar Draft haul for the NSW/ACT region, with eight players primary listed following last Thursday’s National Draft, for a total of 12 players who will enter the AFL system.

AFL NSW/ACT Talent and Coaching Manager Darren Denneman was pleased with the result.

“After Thursday’s eight selections the addition of another four players today is an outstanding outcome, and something everyone involved with football in NSW/ACT should be very excited about,” Denneman said.

“The result reflects very well on AFL NSW/ACT, with all players, except for Ivan Soldo as a Basket baller, having had a relationship with AFL NSW/ACT at some point in their career at some level.”

AFL NSW/ACT General Manager Craig Bolton praised the NEAFL competition, and highlighted the magnitude of the result for the ACT.