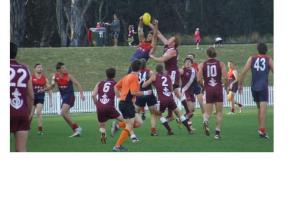 The AFL Sydney season kicks off this weekend with a number of intriguing sub-plots scattered across the grounds this weekend. The Premier Division competition will be doing well to challenge last year where the battle within the top five sides was fierce right to the final round. In 2014, the competition cuts back to 10 teams with all having a realistic chance of making the finals.

The story that has generated the biggest headlines in AFL Sydney circles in the last week has been Manly-Warringah’s name change from the Wolves to the GIANTS. It is a signal of their growth and meteoric rise as a club that the now-premiers have gained the respect of an AFL club.

They start their title defence with a tricky trip down the M5 to Kelso Oval to play Preliminary Finalists, St George.

St George lost their first round at this same venue last year against UNSW/ES and will be looking for a better result this time around. They have bolstered their list with some good emerging talent, particularly from Illawarra- who will not be fielding a top-tier team in 2014.

Tom Green is a good user particularly across half-back while Kuiam Anu is an impressive junior who if he plays senior football will be hard to contain on the outside. Their biggest catch has been former Sydney Hill Eagle, Karl Merson who has rejoined the local competition after time in the WAFL. He is a strong-bodied youngster who will mix between midfield and forward.

Some small-to-medium sized forwards will be useful with Nick Ryan and Paul Sain (ruckman / forward) the prominent targets in the absence of Jason Saddington (TAC Cup coaching commitments). Alexander Wynn will also have a role keeping the ball in the forward half.

When I went through marking key men for Manly-Warringah, I hardly found the highlighter leaving the page such is their depth. They were somewhat of an unknown quantity after dominating the Division One competition but it is now a scary proposition what they have in terms of midfield rotations and players able to win the contested ball.

They have added to that with former UTS Best and Fairest, Michael Atkinson. Their marquee signings include Brayden Fowler (Casey Scorpions), James Brain (SANFL) and Jordan Weir (Sydney University).

Their defence was so impressive last year, possessing the best record in the competition by some distance. Harrison Koch was heavily underrated in a key post while he got able support from the likes of Thomas Thurgaland and Podbury Medalist, Lachlan Kilpatrick.

They must be killing each other at training in an attempt to get into the top-22. Coach Leigh Brain has moulded a tight unit and they will again be hard to beat.

You only have to look west of the ANZAC Bridge to see the excitement for season 2014. I am not talking about the GWS GIANTS but Western Suburbs and Campbelltown who must internally be looking at finals at a minimum this year.

Western Suburbs have smartly built their list, aided by the demotion of Balmain to Division One. With that they have landed Balmain players- Adrian Hill, Tom Mabon, Kristian Ericson, Matt Round and Leigh Conway. All are handy contributors but cannot do the work on their own.

Kevin Eynaud is a shrewd operator and is often one to downplay chances but he should know better to try and get a couple past Danny’s nose. Two players come with strong pedigrees in Lindsay Scown and Taylor Williamson. Scown comes from Airport West in the EDFL where he played 14 games last year, while Williamson deserves strong attention having come from Clarence in the Tasmanian State League. He will assume a key forward post.

If these players perform and they continue to get good development out of full-back Matthew Lemme, Brenton Mumme and Yanni Milligan-Saville, they will be very dangerous this year.

Campbelltown is an exciting proposition as well. They don’t have to do much in terms of young talent rather than give them senior exposure and watch them grow. What they needed to do was add some strong leaders at the top-end which they have done well.

Dean Brogan and Gerard Bennett are their much-vaunted signings but Shannan Kershaw almost acts as a new recruit such is his dodgy run with injuries.

I would pay money to watch Amua Pirika play, while the return of Alex Sneddon will strengthen their ruck division even further.

The powers that be in the AFL Sydney office were quick to put this match as an opening round blockbuster such is the rivalry between these two Eastern Suburbs neighbours.

UNSW/ES have had the edge in previous seasons in terms of success in the top grade but there are some out there suggesting there may be a changing of the guard in 2014.

In an interesting sub-plot, former Bats coach Daniel Lynch has crossed the floor to the Bulldogs this season. He has added Illawarra’s best player of the last few years, Jeremy Daniher. Daniher will play a key inside midfield role.

Jeremy Kiel and Max Collett are the class ball-users while Peter Kefalas and Joel Robbie will join Daniher as the workhorses.

The two key players for mine are Tom Heath and Alex Henderson in leading the defence. Ryan Plant is also likely to play a quarter-back type role across the back-half as he has done in the last couple of seasons.

UTS are always hard to gauge. Lots of transfers have equalled a puff of smoke in the last two seasons. Alan Kymantis is somewhat of a spiritual leader down in the Bat Cave so you can expect a spirited and hopefully more consistent Bats’ performance on a weekly basis in 2014.

Former Collingwood (VFL) star, Tom Sundberg and AFL-listee Fergus Watts are the plum recruits. There are big question marks whether Watts can play a full season given his run of injuries. They need more than these two and need to prove they can be more than just a big-bodied contested-football oriented side. They need to use the ball better on the outside and find avenues to goal.

Both sides won their opening round last year and with the expectation of a close competition this year, a strong start is pivotal.

North Shore will be one side desperate for the 2014 season to start after bowing out in straight sets in 2013. They would have been looking at that last round game against Manly-Warringah that if they won they would have finished minor premiers and had the first week off.

Redemption or whatever you would like to call it starts at Henson Park late Saturday afternoon against a tricky proposition that is Sydney University.

The Bombers are said to have a few injuries in their camp. What is known though is that they need more avenues to goal. It became glaringly apparent that they were too reliant on Daniel Roberts. They lost a reliable foil in Jack Davis over the off-season but in saying that have got one of the most versatile players in Sydney football in Selby Lee-Steere .

Selby can play centre half forward, back, ruck (he even played on-ball in games for Balmain), hey he could probably play a wing role from off the top of the Henson grandstand!

Jackson Dwyer is a strong runner and will suit the modern game and style adopted by coach Jon Hayres. Teddy Strudwick also returns home after a stint at Sydney Hills Eagles. Runner-up Phelan Medalist, Sam Carruthers will also be a very important cog in the Bombers midfield.

Sydney University have the luxury of their NEAFL side having the bye in the opening round. They have a free hit in terms of the number they can bring back as their NEAFL nor Premier Division side have opened their season proper, but they will exercise discretion.

Anton Turco takes the reins for the first time and his enthusiasm should be a boon for his troops. It will be interesting if MJ Figg plays across centre half forward or back. He has a great set of hands and should play key forward.

John Haggerty and Tom Elkington, if they play, are also class players. The Students are always an unknown quantity and it is often a matter of seeing who turns up. The issue of depth should not be as big early in the season but could rear its ugly head down the course.

Danny’s Tip: I have a feeling here and have changed my original thoughts- Students by 11

The final match of the weekend will be played on a Sunday afternoon at Blacktown International Sports Park No. 2.

Pennant Hills should have strong motivation to go one step further after a strong showing in the Grand Final last season.

Their list is even better despite losing Luke Bilbe and Alastair Richardson. They have added former NSW Country player, Lloyd Shepherd, and EFL stalwart, Sam Zikman.

James Dunn is commanding attention from the Swans Reserves but will play on Sunday and is a noted ball winner. Matt Carey and Ranga Ediriwickrama add the X-factor to Chris Yard’s lineup.

Sydney Hills have been tipped for a lowly finish this year and don’t get the luxury of Sydney University with their NEAFL side travelling to Ainslie on the same weekend.

While the composition of their final side is unknown and there is no trend to work off as it is Round 1, Damian Charleston and Mark Skuse are experienced campaigners and will be wise heads if they line up in Premier Division.

Former Magpie, Ryan Barrett is a strong backman, while new additions Ken Ewen-Chappell (Illawarra) and Josh Cass (Balmain) are well-accomplished when it comes to Sydney football.