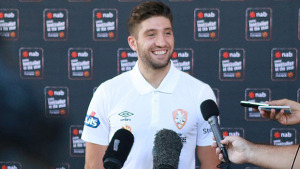 Football Federation Australia (FFA) and NAB, together with Brisbane Roar, are proud to announce Brandon Borrello as the March nominee for the NAB Young Footballer of the Year 2014/15 Award.

Borrello was a standout for Brisbane Roar in a month that saw the reigning Hyundai A-League champions win only one of their five matches. The forward started in four of the five games, providing one goal assist in that time and scoring the winner in the home victory over Western Sydney Wanderers.

The 19 year old was honoured to receive the nomination for the prestigious award.

“It’s a real honour to win the NAB Young Player of the Year nomination for March, it was a breakthrough month for me,” Borrello said.

“I got my name out there and I learned so much from the experienced guys in the Roar team. I want to thank my team mates and coaches for helping me win this award because they have been excellent in my development as a footballer.

“My goal now is to keep learning as much as I can, work as hard as I can and continue to build on what was a fantastic month for me.”

This is the first time that Borrello has been nominated for the NAB Young Footballer of the Year Award.

Borrello is now a contender for the title of NAB Young Footballer of the Year 2014/15 along with Adelaide United’s Jimmy Jeggo (December nominee), Western Sydney Wanderers striker Tomi Juric (November nominee) and Sydney FC’s Terry Antonis (October nominee). Due to the Hyundai A-League break for the Asian Cup, there was no nominee for January while Melbourne City defender Connor Chapman (February nominee) is ineligible having received a red card.

“We congratulate Brandon Borrello on his nomination and look forward to watching his growth and development on the football field in the coming years,” said Ms Chamberlain.

“We are also pleased to recognise Borrello’s nominated junior club, Modbury Jets in South Australia, and hope that our support will help the club continue to develop the game at a local grassroots level."

NAB has generously donated a $1,500 equipment pack and $1,000 in a NAB Community Saver Account to Borrello’s chosen junior club.

The overall winner of the NAB Young Footballer of the Year 2014/15 Award will receive a $10,000 personal investment portfolio, along with a NAB Private Client Manager to assist with a range of banking and financial services.

“As a supporter of the NAB Young Footballer of the Year Award, NAB is proud to play an important role in recognising and rewarding the stars of tomorrow. We hope to one day see these nominees kitted out in the famous green and gold representing the Socceroos,” Ms Chamberlain continued.

Each month representatives from the football media and the FFA Technical department vote on a 3-2-1 basis for the most outstanding U-23 players in the Hyundai A-League during that period.