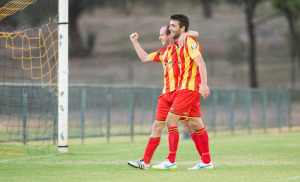 MetroStars recorded their first win of the season as they prevailed in a tightly fought 1-0 win over Adelaide Comets at TK Shutter Reserve in round 2 of the South Australian Playstation4 National Premier League.

The match started with both sides remaining cautious as they looked to find an early touch. Comets made the first chance of the match with Davide Zerillo finding Matthew Bouzalas whose shot just went over the bar.

The match came to life after MetroStars’ Matthew Deegan finished off a brilliant individual run on the edge of the box to score the decider. After some intuitive play from Micahel D’Aloisio, Deegan showed the defenders a clean pair of heels to give his side a crucial advantage.

As the game opened up in the second half, both sides enjoyed good chances but MetroStars held on to claim the win.

“It was a very good individual goal, he keeps showing glimpses of doing it but yeah it was a ripper goal last night.”

Godley also mentioned how the result has added meaning when considering the history of when the two sides last met.

“Last year against the same team we walked away with nothing so they’ve always been a little bit of a bogey side so it was good to get a win.”

While keeping a clean sheet was a good indicator for his side’s performance, Godley spoke about the message to his side after the game.

“The clean sheet was good, overall performance was OK, probably not we were expecting or hoping for but managed to get away with it.

“We need to keep improving on an overall basis, there’s a long way to go in the season so we just have to improve every week.”

Despite the loss, Adelaide Comets Captain Steven Warner said his side took plenty of positives out of the match.

“It was a good game, it was a good test to see where we were at and obviously didn’t get the result but it wasn’t disappointing.”

“We were finishing 5th last year and Metro won the Minor Premiership last year so we definitely got some confidence out of this game.”

While praising the team performance, Warner was impressed with John Karatzas’ individual effort.

“So far he this year he’s been doing well, he’s got a lot more that he can give to the team, he’s very skilful with a lot of flare

As his side moves onto next week, Warner spoke about where his side needs to improve.

“Some finishing definitely, being more clinical in front of goals, if you take opportunities it’s a different game so that’s what we need to work on, creating more opportunities and scoring goals.”