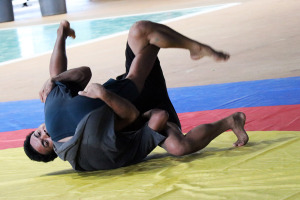 For the 2018 Micronesian Games wrestling competition, there are three wrestling styles that will be executed in the following sequence:

In Greco-Roman Wrestling, it is forbidden to grasp the opponent below the hips and to squeeze him with the legs. All pushing, pressing or lifting by means of contact with the legs or any part of the body of the opponent is also strictly forbidden.

In Greco-Roman Wrestling, unlike in Freestyle Wrestling, it is necessary to accompany the opponent to the ground.

In Freestyle Wrestling, it is forbidden to execute a scissor-lock with the feet crossed is forbidden on the head, neck or body.

On sand, inside a 23’ diameter circle.

- Tiebreaker criteria:
1st - Wrestler with 2 point move,  2nd - Last person to score
If no score after 3 minutes...match keeps going until someone scores

- No stoppages...No timeouts, No injury time
(except by decision of referee or to get sand out of face).

- If a trainer is called to the ring it is an automatic injury default for that match
- Penalties: 1 Point for an illegal action.  (2nd offense - wrestler defaults match)

- Kicking, slapping or punching (includes malicious crossfaces)
- Butting heads, attacking the face, or pulling hair
- Throwing sand or pulling clothing
- Head-only holds or holds/moves that may lead to dislocation or harm
- Standing throws with the intent to harm the head or neck
- Stopping the match for any reason (except sand in face)

- Disqualification will result in defaulting the match:
- An illegal action where an opposing wrestler is hurt or bleeding
and cannot continue
- Coating the skin with a greasy or slippery substance

- Flagrant Penalties will result in elimination from tournament:
- Illegal Actions (with intent to harm), Biting
- Swearing, not shaking hands with opponent
- Arguing with, threatening or purposeful contact with referee
- Any action that is deemed unacceptable or irresponsible...
in match, tournament area or State Park

Return to Schedule and Results
--ABOVEADS--